The sandbox on Haverty Hollow’s upper playground can be transformative.  During free play, the preschoolers often use the shallow pans, plastic food containers and aluminum sieves to pretend-bake cakes or construct complete meals for their fellow “family” members. At activity time, Mr. John demonstrates some of the science behind volcanic action. The children mound the sand, Mr. John mixes the eruption elixir, and the next thing you know, pseudo-lava is bubbling up and over from the mouth of the volcano. Later on in the day, the After School children exercise their imagination by creating intricate forms of tunnels and underground passages. Everyone makes the sandbox their own during a typical day at Haverty Hollow. 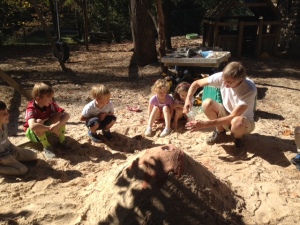 Mr. John mixes the magic potion that will erupt the volcano the children have helped construct in the sandbox. 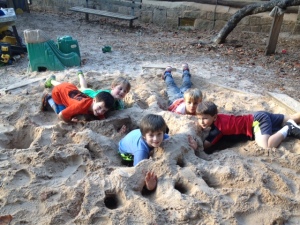 After School children show off their tunnel-building skills during free play. 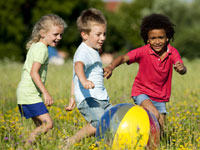 Haverty Hollow offers Holiday Camps many of the days Atlanta Public Schools are closed. Be sure to register for Drop In to be able to attend.

Path to the Field at Haverty Hollow 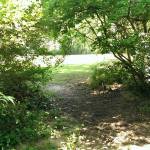